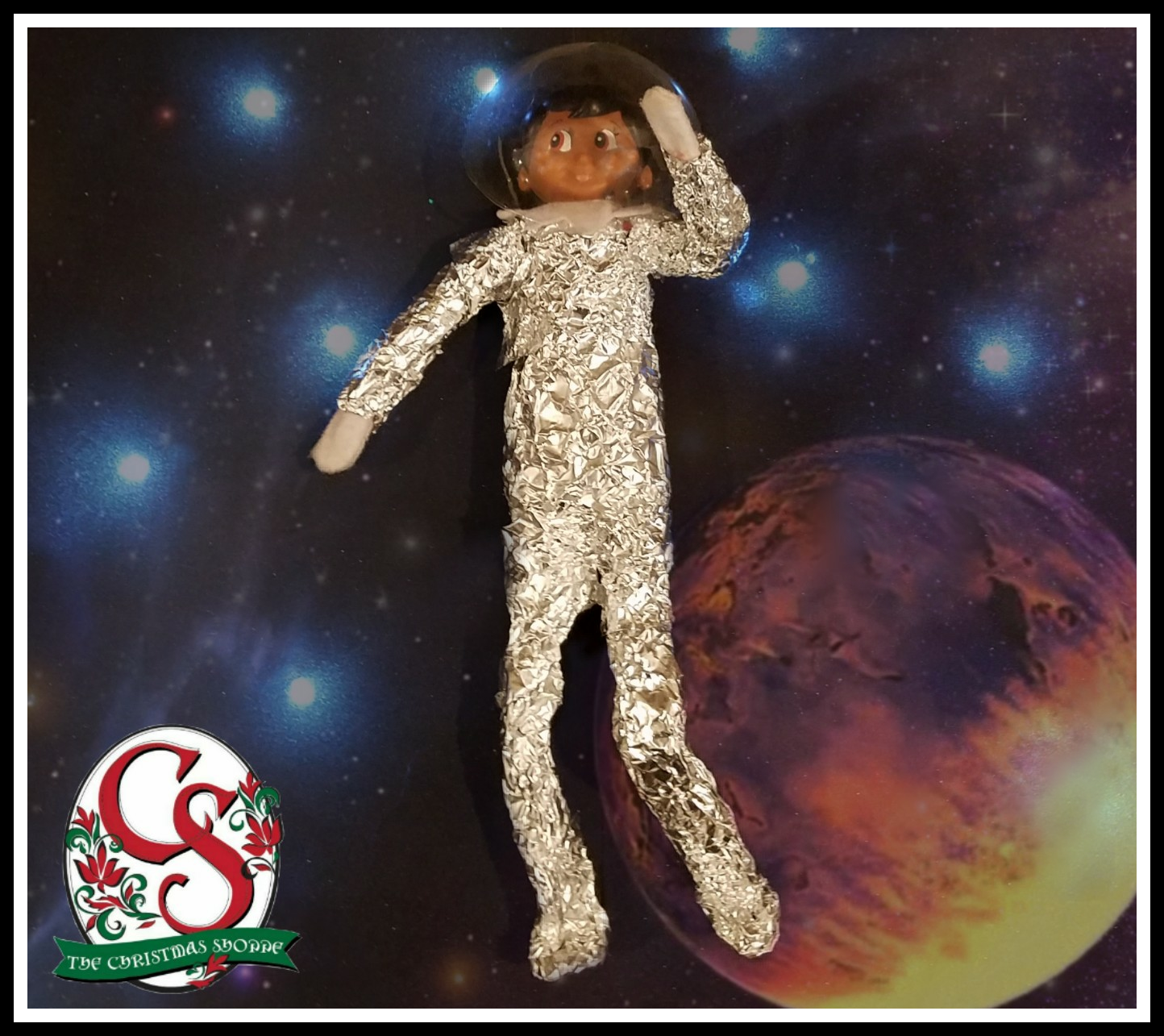 Now that I’m a bona fied space elf, I have a very important question! Where does an astronaut park his space ship?
-At a parking meteor! Tee-Hee! 😉
This week we are talking about SPACE and SCIENCE! COOOOL!
Let’s first take a moment and remember some of the great American history of our space program. How about a quick story time about the evening Apollo 11 landed on the Moon.
The United States’ Apollo 11 was the first manned mission to land on the Moon, on 20 July 1969.
With more than half a billion people watching live on television, Neil Armstrong climbed down the ladder and proclaimed: “That’s one small step for a man, one giant leap for mankind.”
Shortly afterwards, Aldrin joined him offering the people at home a powerful but simple description of the Moon: “magnificent desolation.” The astronauts continued taking photos, collecting samples and exploring the lunar surface for a few more hours.
Before heading back to Earth, the crew left behind an American flag, a patch honoring the fallen crew of Apollo 1, and a plaque that reads, “Here men from the planet Earth first set foot upon the Moon. July 1969 A.D. We came in peace for all mankind.”
NASA celebrated the 50th anniversary of the historic Apollo 11 mission in July of this year. (2019)
I heard that for the 50th anniversary of the Moon landing, they built a restaurant up there.
-The astronauts said the food is good, but there’s no atmosphere. Har-Har 😉
The Christmas Shoppe celebrated the anniversary of the Moon landing in conjunction with National TV Dinner Day (September 10th.) 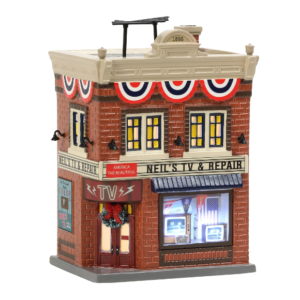 That was also when we showcased THIS Snow Village collectible.
In July of 1969, people across America gathered in front of their televisions to witness history in the making as our astronauts took mankind’s giant first step on the Moon. Features Lit TV screens in the display window which show Moon landing images.

“The Earth reminded us of a Christmas tree ornament hanging in the blackness of space. As we got farther and farther away it diminished in size. Finally, it shrank to the size of a marble, the most beautiful marble you can imagine. That beautiful, warm, living object looked so fragile, so delicate, that if you touched it with a finger it would crumble and fall apart.”– James Irwin 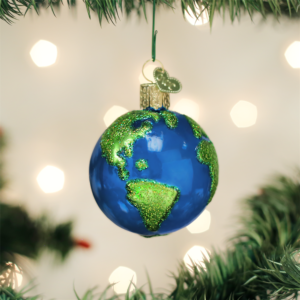 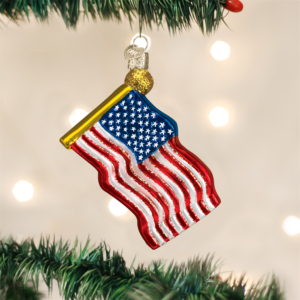 Love You To The Moon

I mentioned before that the AVERAGE distance from the Earth to the Moon was 477,000 miles. Why mention the average distance? Well, the Moon is not always the same distance away from Earth. The orbit is not a perfect circle.
When the Moon is the farthest away, it’s 252,088 miles away.
When it’s closest, the Moon is 225,623 miles away. 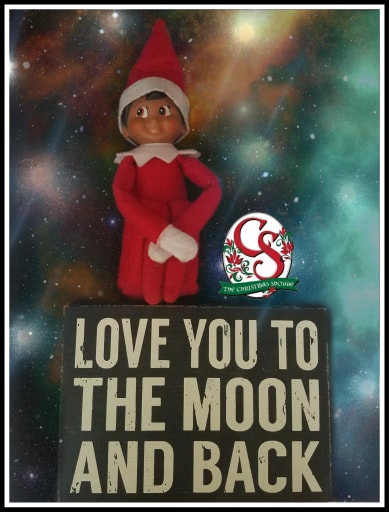 To see for yourself how far apart Earth and the Moon are, try this:

*If Earth was the size of a basketball, the Moon would be the size of a tennis ball. This can give you an idea of how they compare. 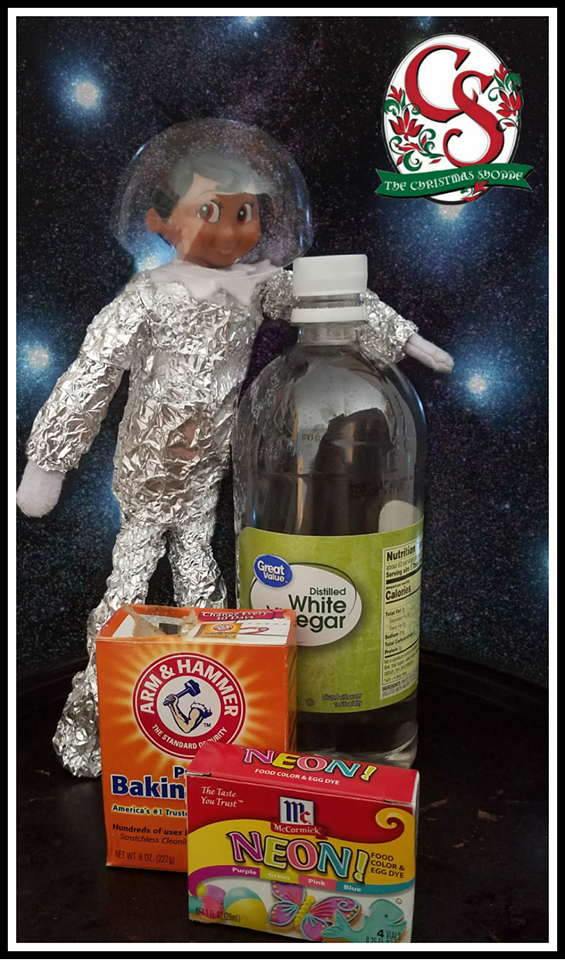 I saw this cool idea for a Rainbow Baking Soda and Vinegar Experiment online! So, I decided to try it out only, I chose to do a COSMIC version! You can do it too!
What you will need:
Baking Soda
Vinegar
Food coloring
Water
Bowls or cups
Spoon
Plate or Cookie sheet

1. Add a large portion of baking soda into a bowl (or any container)
2. Add 2-3 drops (or more if you’d like) of food coloring. I used NEON colors and decided to name them: Blast Off Blue, Galactic Green and Planet Purple. You can mix as many colors as you want
3. Sprinkle a small amount of water into the bowl & mix 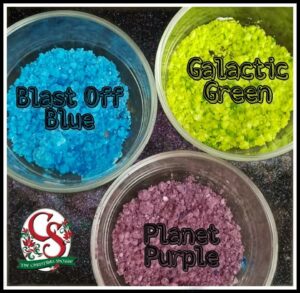 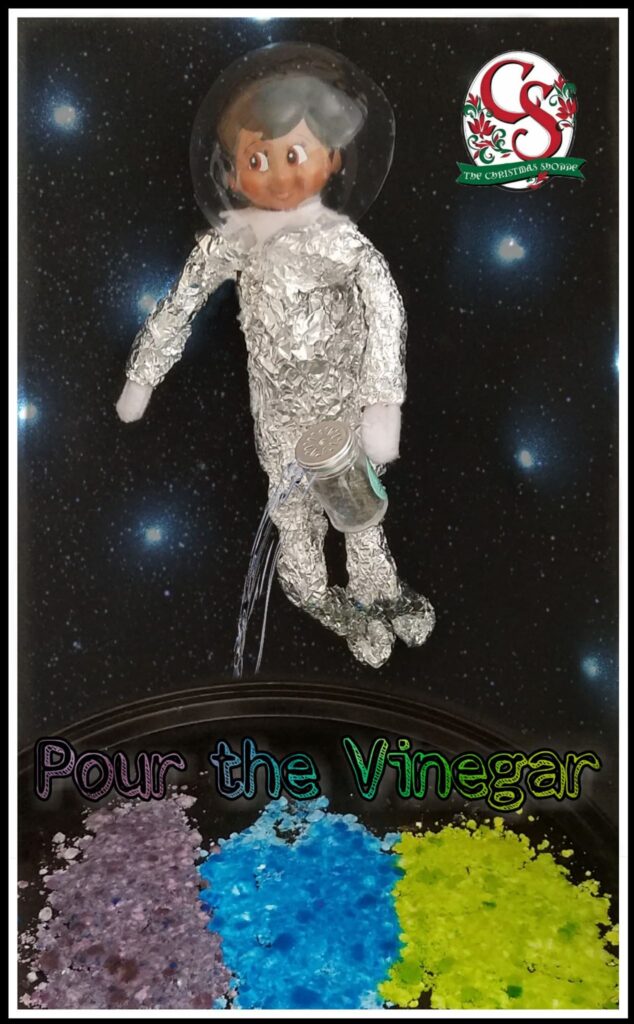 Wonderopolis tells us What Happens When You Mix Vinegar And Baking Soda.
AND they even share a tip for a secret ingredient: Dish soap! Try it and let me know if it helped the bubbles stay longer!
Baking soda and vinegar react chemically because one is a base and the other is an acid. Baking soda is a basic compound called sodium bicarbonate. Vinegar is a diluted solution that contains acetic acid.
The baking soda and vinegar reaction is actually two separate reactions. The first reaction is the acid-base reaction.
When vinegar and baking soda are first mixed together, hydrogen ions in the vinegar react with the sodium and bicarbonate ions in the baking soda. The result of this initial reaction is two new chemicals: carbonic acid and sodium acetate.
The second reaction is a decomposition reaction. The carbonic acid formed as a result of the first reaction immediately begins to decompose into water and carbon dioxide gas.
SCIENCE IS SO COOL!

Well Friends,
I’d tell you another chemistry joke.
-Unfortunately, all the good ones argon. 😉
Until next time! See you at The Shoppe!
~S’more the Elf
Check out our Blog Archive HERE