It’s Spider-S’more! Spider-S’more! Radioactive Spider-S’more. It’s October! Time for Halloween and creepy, crawly spiders! But did you know that spiders have a Christmas tradition, too??? They do, and I am going to give you all the details. Because I am your friendly, neighborhood elf on the shelf.

This year we may have to come up with some super creative Halloween costumes because of COVID. We are used to wearing masks, but we might need one that matches our costume! Of course, it’s normal to wear a mask for a Halloween costume. So, I think it will be easy.
This year a certain radioactive spider made my Halloween costume choice for me. 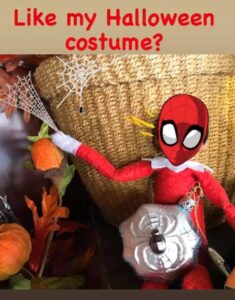 Well, spiders aren’t just for Halloween. Spiders are for Christmas, too! Have you heard the tales of the Christmas Spider Tradition? There are two versions, and both are lovely.
Gather ’round, children! Time for the tale of the Christmas Spider Tradition, version 1.  As everyone knows, Jesus was born in a humble stable and laid in a manger because there was no room for them in the… house. What a lot of people don’t know is that the word for “inn” that we see in the Bible could mean “guest room”.
You see, Joseph and Mary traveled to Bethlehem to be registered for the census because Joseph belonged to the house of David and all the people descended from David had land in Bethlehem. So, when Joseph and Mary went to Bethlehem, they had lots of family to stay with, but the problem was the WHOLE FAMILY was there. Also, when a woman gives birth, people like to give her some privacy. The only place in the house that had enough room to give her some privacy was the stable, which was probably a carved out cave type space under the home to keep the animals. It was kinda like the garage!
Well, according to legend there was a spider living in the stable. Like all of nature, she recognized that this was the Son of God born in her stable home. She saw that Jesus was being wrapped in strips of cloth like a mummy, just like shepherds would do for their newborns. During the night shepherds came to see the new baby that was King of kings and Lord of lords, born like one of their own babies.
Meanwhile, the spider began weaving a special gift. She felt that the Word of God made flesh, the same Word that spoke all of creation into existence, even herself, deserved something nicer to be wrapped in beside torn cloth. So, she wove all night long, creating a silk blanket from her webs for the baby Jesus.

Another story takes place much later and is set in Europe. Even though it was much later than when Jesus was born, it was still a long time ago. The story goes that there was a very poor family. They were so poor that they couldn’t afford any gifts or decorations to celebrate Christmas.
However, they decided to celebrate anyway. They went into the forest and cut down a pine tree to bring into their home on Christmas Eve. However, they had no decorations for the tree.
A spider was living in the tree that they brought home. All day Christmas Eve she watched the family. They were so kind. Instead of giving things to each other for the holiday, they did special things to show they loved each other. They took care of each other, did chores for each other, spent time together, and gave kind words and hugs.
The spider was so touched, she decided to decorate the tree for them during the night. After they went to sleep, she spent hours spinning webs throughout the tree’s branches to decorate the tree beautifully.
During this time and in this country, the people believed that the Christ Child came on Christmas Eve instead of Santa. When the Christ Child (baby Jesus) arrived at the family’s home, He was touched by the kindness and goodness of the family, too. He saw the webs that the spider had spun, and He reached out to bless the webs. As He touched the webs, they were instantly turned to pure silver.
The family woke up to find the silver strands! The Christ Child had provided for all their needs. This story is the inspiration behind tinsel decoration, too! Some families even put a spider ornament on their Christmas tree to remember the tale.
I hope this helped you learn s’more about the tradition of the spider, and to “Celebrate Always” (I Thessalonians 5:16).
Want to see my past blogs?
CHECK OUT OUR BLOG ARCHIVE HERE
Want to be the first to see my future blogs? 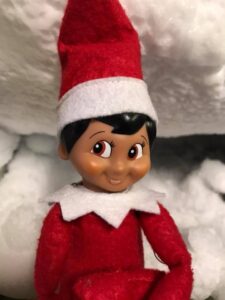 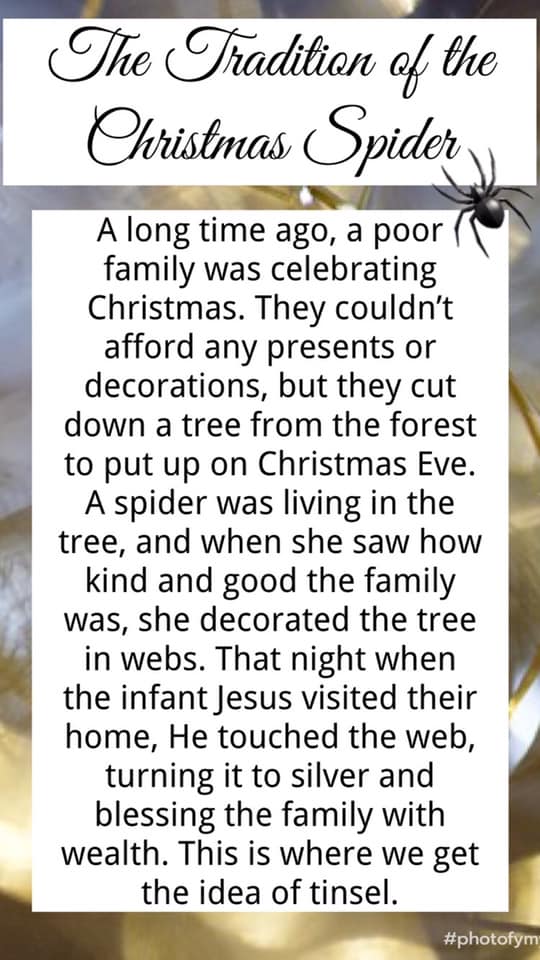