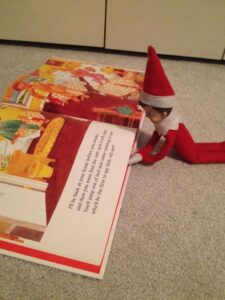 This blog is inspired by the scavenger hunt held at The Christmas Shoppe last week. Congratulations again to our winners and a big thank you to everyone who paticipated!
It’s official! Christmas crunch week is here!
If you’re an Elf, that means extra studying to pass our test of Christmas Spirit. That’s our certification to spread Christmas cheer! Without it, we cannot fly to The North Pole and back. (A major qualifier in my job description.)
I know humans are really busy with their hustle and bustle these last few DAYS before Christmas too! However, I would really appreciate you finding a few minutes to help me study, if you could?
Oh, you will? Thank you! Here are some of ther questions (and answers) that will be on my test of Christmas Spirit:
10. Traditional Advent wreaths have four candles. What do these candles represent?

Have you been reading my blog? The answer to this question can be found here, in a previous week we shared. 😉
9. In the Bible, which angel tells Mary she’s going to give birth to Baby Jesus?

This answer is C! We always want our Elves to know the story of Jesus’ birth. After all, it IS His birthday we’re celebrating. He is the reason for the season.
8. If all the children in the world made Santa’s Nice List, how many presents would he need?

The answer is B! The Elves of Santa’s Workshop work so hard every year to create over 2 billion toys! Every one at the North Pole really wants ALL the kids to be on Santa’s Nice List (even if they barely make the list on the second check!
7. Which Muppets played Tiny Tim’s parents in A Muppet Christmas Carol?

B. Of course! They are a dynamic duo. A Muppet Christmas Carol is a classic Christmas movie everyone should experience! If you’ve never seen it, check it out!
6. Which is NOT a place where Santa usually leaves Christmas presents?

C. While you might be familiar with gifts in stockings, children in the Netherlands leave out their shoes instead of stockings.
5. Where would a child hang a stocking for Santa?

C! It’s traditional to leave your stocking in either location. Of course, those without a chimney might consider the foot of their bed as the primary location.
4. What’s a baby reindeer called?

A! As they get older, a reindeer’s antlers will grow at a rate of nearly 1 inch per day!
3. What do you get when you cross a snowman with a vampire?
FROSTBITE! HAHAHA! OK, so that’s not actually a question on my test. But I wanted to make sure you were paying attention. As you know, us Elves have a tendency for a little tomfoolery.
2. What is the legend of Saint Nicolas?
Kris Kringle, Christkind, Father Christmas, Père Nöel. Children and families from all over the world are visited by Santa Claus. (It’s very important to Santa to honor each region’s customs.) No matter where in the world you are, no matter what Santa means to you, of if he is just a happy memory in your heart. One thing is universal. The story of Santa begins with a real man in history. And because of his kindness Nicholas was made a Saint.
St. Nicholas was a Bishop who lived in the fourth century in a place called Myra (now called Turkey). He was a very rich man because his parents died when he was young and left him a lot of money. He was also a very kind man and had a reputation for helping the poor and giving secret gifts to people who needed it. 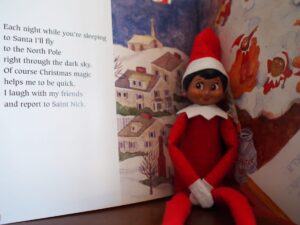 The most famous story about St. Nicholas tells how the custom of hanging up stockings to put presents in first started! It goes like this:There was a poor man who had three daughters. The man was so poor that he did not have enough money for a dowry, so his daughters couldn’t get married. One night, Nicholas secretly dropped a bag of gold down the chimney and into the house (This meant that the oldest daughter was then able to be married.). The bag fell into a stocking that had been hung by the fire to dry! This was repeated later with the second daughter. Finally, determined to discover the person who had given him the money, the father secretly hid by the fire every evening until he caught Nicholas dropping in a bag of gold. Nicholas begged the man to not tell anyone what he had done, because he did not want to bring attention to himself. But soon the news got out and when anyone received a secret gift, it was thought that maybe it was from Nicholas.

C! Be sure to come back and read our future blog post all about the 12 days of Christmas.
Also, hop in and say hi to the Elves at The Christmas Shoppe!
As 2017 comes to an end, commemorate the year with a special dated ornament now 40% off.
Extra Credit Question: How many days until Christmas?
THERE ARE ONLY 7 DAYS UNTIL CHRISTMAS DAY! AND ONLY 6 DAYS UNTIL CHRISTMAS EVE.
Wishing you and your family a very Merry Christmas!
~S’more the Elf
Previous S’more Blog ~~~~ Next blog coming soon!
We are oh, so social! Follow us on Facebook, Pinterest, and Instagram!
Get the latest S’more Blog in your email by clicking HERE!