Hi, all! S’more the elf here! Ever noticed how much s’more there is to celebrate in the spring? Don’t get me wrong, I LOVE Christmas and Halloween and Thanksgiving, BUTT we wouldn’t have the reason to celebrate without Palm Sunday, Passover, Good Friday, and Easter (or Resurrection Sunday as it’s sometimes called).

Plus, we have so many fun spring events… Spring Diva Night! First Saturday Shopping! Market Days! National Handmade Day! Everyone is ready to get out and about and enjoy the fresh air. If you haven’t already, you should take a look at all the Upcoming Holidays and Events to be in the know, you know. Consider this your OH-fficial invitation, if you haven’t received one already. 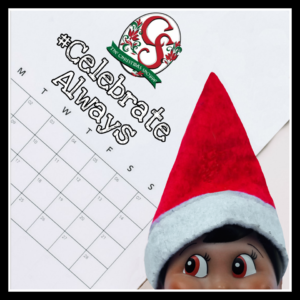 Today, I am most excited about the holidays surrounding Easter and why they are so important… even more important than Christmas! Shocking, I know. You see, all of these spring holidays are to celebrate how God stepped in to save us. If we didn’t need saving, we wouldn’t have these holidays. And if we didn’t need saving, God wouldn’t have become human and been born. And if Jesus hadn’t been born, we wouldn’t be celebrating Christmas.

Passover begins on March 27th this year. It’s a week long celebration where we can replay how God created his own nation of people, and it sets the stage for the rest of our spring holidays!

Here’s what happened. There were a huge group of people who all descended from a family that worshiped God, and they were slaves in Egypt. The Pharaohs at that time were worried that if this group got too big, they might fight back and no longer be slaves.

First the Pharaoh tried killing any boys right as they were born, but the midwives knew that was wrong and protected the baby boys. Then, the Pharaoh tried to have all the baby boys thrown into the Nile River. A lot of babies died, but this group of people continued to grow. So, the Pharaoh decided to work the slaves so hard that they wouldn’t be able to revolt and demand freedom.

The slaves suffered so much, and God saw that they needed help. So, God sent a man named Moses to speak to Pharaoh. Egyptians believed in other gods and even believed the Pharaoh was a god. Pharaoh believed he was more powerful than the God of Moses. So, he refused to let the slaves go. God showed he was more powerful than the Egyptian gods with 10 plagues.

On the 10th plague, Moses warned the people this last plague was definitely going to mean they would be saved from slavery and get to leave. So, they needed to get ready. For the 10th plague, God said He would kill all the first born sons in Egypt, except for those whose families chose God instead of the gods of Egypt.

So, everyone who chose God got ready, and we can celebrate by getting ready in the same way.

That night, God sent the death angel over the land of Egypt, and only the families that chose God were passed over. The first born sons in every other family, even Pharaoh’s own son, died that night. Pharaoh was upset because he lost his son. He was, also, upset because he thought he was a god who controlled life and death, but he doesn’t. So, he told the people that all the followers of God needed to leave immediately.

So, God’s people got to leave to become their own nation and be free from slavery. We all are born enslaved to making bad decisions. We can’t help but make mistakes. In the Bible, it’s called sin, but God wants to save all of us. It’s s’more to celebrate for sure!

The story is actually longer and more detailed and is the basis for the Christian celebration of the Lord’s Supper or the Last Supper or Communion. You can read the book of Exodus in the Bible to get even more details. 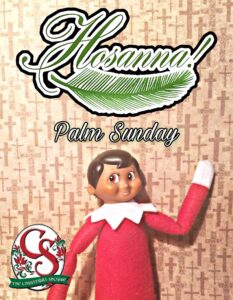 Palm Sunday is March 28th this year. It celebrates when Jesus came into Jerusalem for Passover a week before he died on the cross.

Jesus had been teaching and doing miracles for three years. The city of Jerusalem was packed with people who had come to celebrate Passover. Because of what they knew about Jesus, they believed He was rightful king of Israel and would save them from being oppressed by other countries like Rome. They felt there was s’more to celebrate and were so excited that they created a parade out of Jesus arrival. They waved palm branches and shouted “Hosanna! Blessed is the son of David! Blessed is he who comes in the name of the Lord!” as Jesus rode into the city.

They were showing that they believed he was the Messiah, and like Moses would save them.

So, we celebrate the same thing at church on this Sunday! We get excited because the day to celebrate our salvation is only a week away! We wave palm branches and sing! Jesus is our King and our Messiah!

You can read all the details in the Bible in Luke Chapter 19 and Matthew Chapter 21. 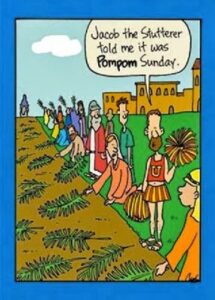 Good Friday is on April 2nd this year. It’s the day we remember the death of Jesus on the cross. I know what you are thinking… “Good” doesn’t seem like quite the right word, but it is good.

You see, we all do wrong things sometimes. It’s part of being human to not be perfect. When we do something wrong, there are consequences, and one of those consequences is that we are separated from God, the creator of life.

Well, God is the only one who is so perfect. So, God became a human being. His name was Jesus. He lived a normal life with all the opportunities to do wrong that we all face, but He never did anything wrong.

The government at the time recognized that He was claiming to be God and thought He was lying. They were afraid of losing power, too. So, they had him killed on a cross.

During the time when Jesus was on the cross dying, the sky went dark and the ground shook. The thick veil in the temple that separated people from the presence of God was torn. Even the Roman citizens in the area knew that a dark sky and an earthquake were the signs of a god.

So, because of Good Friday, we have the good news that we don’t have to be separated from God and die. That’s good. Really good. It’s definitely s’more to celebrate!

You can read more about it in Matthew Chapter 27. 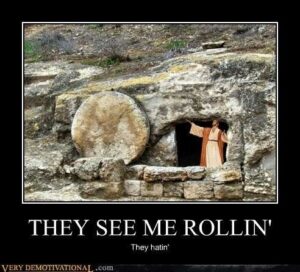 Easter Sunday falls on April 4th this year. If you’ve never read any of the above, you may be wondering what next?!? The story isn’t over! There’s even s’more to celebrate!!!

First, God takes His people out of slavery with Passover! Then, He saves us from being oppressed with Palm Sunday! Next, He redeems us by paying the cost of the slavery on Good Friday!

Well, these are three of the four promises that God made in the Bible in Exodus 6:6-8. They get celebrated at Passover with four cups of wine.

In the four promises, God says: I will…

So, Easter Sunday is when we celebrate that last promise – the one where God brings us to Him to live forever.

Jesus died on Friday, and He was buried in a tomb. He stayed dead all day Saturday, but on Sunday morning, the big stone that sealed the tomb was rolled away and Jesus was alive again!

Because He came back to life, we know for certain that Jesus can control life and death. We know that He can bring us back to life. And, He did it to prove that He will bring us to be with Him in Heaven where we can live forever in the presence of life and light and goodness and God.

There are s’more holidays to celebrate this promise, too! There is the day Jesus rose up to Heaven. Thousands of people saw it. It’s true. There is Pentecost, the day that the Holy Spirit first came to live with the followers of Jesus. By putting the Holy Spirit in us we are brought to the presence of God, too!

What’s this all got to do with bunnies and eggs and stuff? I have a whole other blog about that right HERE.

Our motto at The Christmas Shoppe is “‘Celebrate Always’ Where It’s Christmas Everyday!” We get that “celebrate always” part from I Thessalonians 5:16 which is also translated at “rejoice always.” What does that mean? It means that because we are part of the Kingdom of God, we have so many s’more blessings to celebrate! And, when we celebrate them, we show God how thankful we are for those blessings.

I hope all this information will help you “Celebrate Always” (I Thessalonians 5:16). After all, that is why we do what we do.

Want to see my past blogs?

CHECK OUT OUR BLOG ARCHIVE HERE

Want to be the first to see my future blogs? 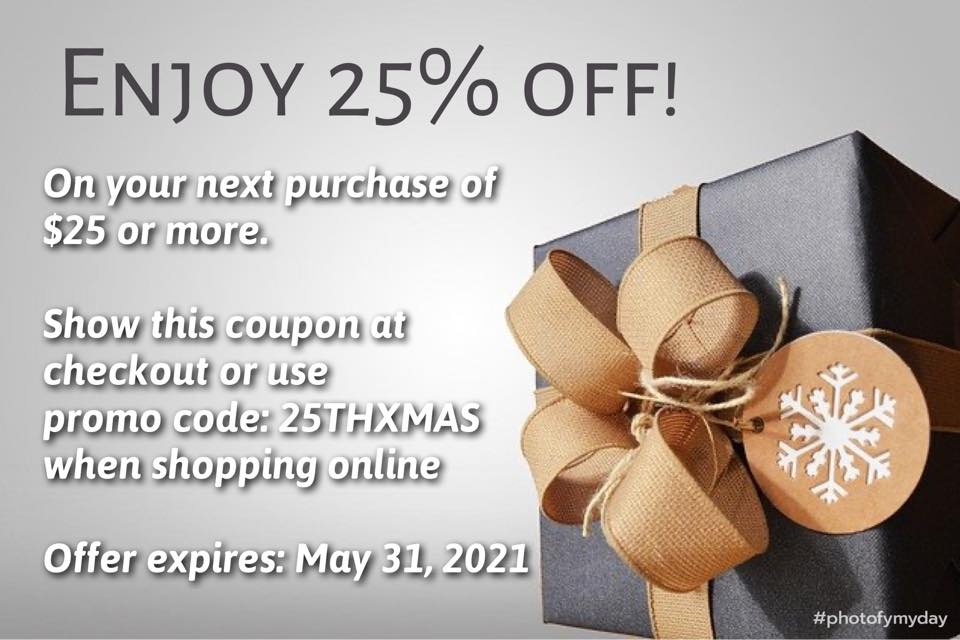